Year Four, Day 208: Happy Socks, Tales from Lyft and the Missing Music in My Life 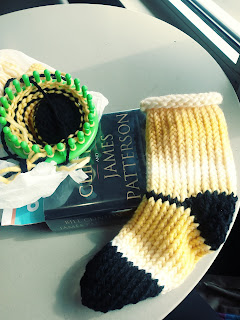 I have completed one sock of my first pair of Happy Socks!  That's my name for them anyway.  They are slipper socks, knitted on a round loom.  Meant to be worn at home, when feeling cozy is of the utmost important. Hey, cozy is always high on my list!

I dubbed them "Happy Socks" because I am making them colorful, and praying for the person who will be wearing them. I feel happy just looking at them!

I also completed the novel, The President Is Missing, by James Patterson and Bill Clinton.

After I read it, I looked at a few reviews online. And I was even more entertained! In fact, I was reading the reviews while riding the bus home the other night. I laughed so hard I snorted. I was getting odd looks from the other passengers! It was this one from "The New Yorker" that caused me to break down in fits of laughter, dabbing my eyes to dry the tears. I had to then put away my cell phone. I think I was annoying the whole bus! https://www.newyorker.com/magazine/2018/06/18/bill-clinton-and-james-pattersons-concussive-collaboration


My advice would be to read the book first before your read the reviews,  especially if  you like political thrillers. There is a bit of a political speech at the end that I also found amusing and quite obviously targeting our current administration.  But if you don't planning on reading the book (it's a super fast read), go ahead and read the reviews.  But not in public!

My next book will be one of more depth. Another Albert Camus novel: The Stranger. I am looking forward to this book, especially after being greatly moved by The Plague, which I plan to reread at a later time.

This is a busy time of year for me. I'm knitting happy socks, reading stacks of books, beginning my fall term of piano teaching, playing the piano for church, accompanying two choirs, babysitting my granddaughter, hooping, to name some of my activities.

Whew! Good thing I have my hobbies!  I have indulged in riding Lyft more frequently as I adjust to my fall term schedule.

I am still feeling emotional from that experience. And I realize that, even though I am a musician; I play the piano and organ in church and for choirs, and I teach piano, I do not often just ENJOY music.  I find myself annoyed by much of what I hear on the speakers in Starbucks, in the grocery store, and from the living room when my family watches television.

I am so moved by music that is performed with feeling and depth. Like Beethoven, Mozart, Josh Groban, Elton John.  I know we all have specific preferences for music. But instead of feeling annoyed by musical choices that are not mine, why do I not listen to my music of choice?

Perhaps I need need ear buds. That would be a start. I think I shall get some today.  I have discovered one element that has been missing in my life! And now that I have my eating under control, and food is not my comfort, perhaps I can find more joy in music!

I am sometime a bit dense. But I am still alive!
On that note, I need to dash.

Talk to you tomorrow!
Love, 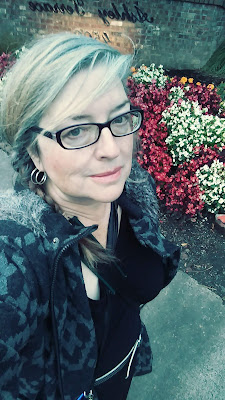