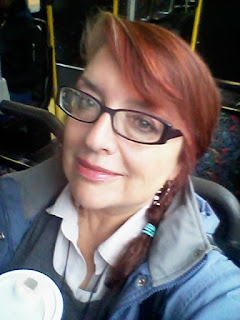 It is a wonderful rainy, blustery fall day!  I love these days. I purposely took the day off from the gym and allowed myself to stay in bed longer than normal.  I am starting to feel more grounded.

I did some stretching and then headed to the store to buy some lentils.  I also picked up a couple of dvd's for tonight. I plan on spending a few hours cleaning, particularly laundry whilst I watch a movie or two.

I am at my library office right now. I have a full load of students, but during my break I have an actual date. A real live date for coffee!

I will call him "A". He is contestant number 3.  I met him on a dating site app. We had chatted a bit. He was polite, respectful and friendly. Only a few years older than me, but I didn't feel any particular chemistry.

I was feeling most blue on Tuesday. Still trying to shake myself of the H, formally known as R infatuation. In fact, I felt so low I decided to stop at the store before choir practice and buy my tried and true pick me up: A small bag of Lay's Classic Potato Chips and a Diet Coke.

I shudder admit this!

But my aim is transparency.

So, there I was walking sadly into the store to grab my fix and a very low male voice said, "Hello there Zita, Piano Teacher".

I looked up into the most beautiful brown eyes.  An older, dignified gentleman. With a "store manager" name tag. I continued to stare, mouth slightly open.  Looking at his name tag and those dreamy eyes.

"Don't you recognize me?", he smiled gently. "I am from the dating site!"

I laughed and remembered.

"You look so much cuter in person", I muttered. Then I grabbed my chips and told him I was a little down and needed a chip and Diet Coke fix.

He smiled and said he had a chip addiction himself.

I reached up and squeezed his bicep. (Not exactly sure why!) I told him it was really nice to meet him.  He rang up my chips and soda.  Asked me if I needed a bag.

"No thank you", says I. "I will eat it in the parking lot".  I told him I was meeting a friend from choir and that I had been coming to that store for years for a snack between choir practice and students.

I exited smiling so big, heart a thudding.

And now, in precisely 10 minutes, I will be seeing A. I am stopping by his store and we are having coffee before my next student. Who happens to be right around the corner from A's store.

I will give you an update tomorrow! Wish me luck!

In the meantime, I met Contestant #4 ("K") yesterday. Again at his work! But this time he invited me.  He is also on the dating site ("Plenty of Fish" lol).

I stopped by his food cart at lunch yesterday.  He made me the most heavenly plate of falafels, rice, hummus and baba ganoush. He was busy, so I ate happily watching him work.

He seemed a bit frantic. His wild black hair blowing all about. His sultry dark eyes darting to and fro.

After I ate his heavenly food I went up to talk to him. We didn't have long. He had to prep for the next rush. I had a student. He invited me into his cart and gave me his secret hummus recipe. It was indeed the most incredible hummus I have eaten. (And believe me, I have had a lot of hummus!)

I declined the offer for drinks after work. Said I had a headache.

I think I will just focus on A for now.