Yesterday three men were stabbed. Two died. One was hospitalized. They were coming to the aid of two Muslim girls who were being verbally assaulted.

I was shocked to hear it happened on the Max train near the Hollywood Transit Center.  One of my regular transfer points.  It was hard to imagine such violence taking place there. On my precious Max train.  People often look weary on the train.  Usually keep to themselves, looking at their cell phones.  Sometimes you hear a few animated discussions. But they are usually happy teens, or young adults.  Once in awhile a screaming toddler.

I was glued to the internet all day as the story unfolded.  So tragic. One of the young men who died was only 23 years old. One year younger than my son. I could imagine my son or his friends jumping to help just like he did.  It could have been one of them. Then I heard the second man that died was a father of four, an Army veteran and a city of Portland employee.

It came out in the news that the perpetrator was known to the Portland Police as a white supremacist. They said he was mentally ill. Had suffered a head injury. Somewhere I read that they did not consider him dangerous.

After I taught piano all day, I had planned to go to dinner and blog. And then maybe hit the gym.  Luckily, I did wake up early and walk/run 1/2 mile at the track before breakfast with the fam.

I gave in to comfort food cravings and went to Burgerville. I needed some serious comfort.  A cheeseburger (on a gluten free bun at least!), fries and a strawberry shake made a dent in my sadness.

I felt a bit better.  And man, Burgerville makes some tasty food!

I put away my knitting and pulled out my cell phone. Unfortunately, with all my internet viewing, my battery was down to only 7% charge. And Burgerville's outlets did not work. But I went on Facebook anway. Earlier, I had read about a vigil that would be taking place at the Hollywood Transit Center. Suddenly, I knew I needed to attend. I had just the amount of time and I was close to a Max station.

I posted a message on Facebook that I was heading down to the vigil. One of my friends from the church I work at messaged me and said she was coming with her husband!

I was a little nervous, excited and sad all at the same time.  I don't usually attend events with a lot of people.  Introverts like me fear crowds.

But this was a good cause.  Uniting for peace.  Coming together to show that we, as Portlanders protect our own and everyone else! We are a very diverse city. And whenever I've seen someone needing help, I see Portlanders come to the rescue.  I am proud of my city.

And my arms broke out in goosebumps when the Max pulled into the Hollywood Transit Center. Hundreds of people were flowing towards the field. Hundreds were gathered already. A little shrine was created along the fence, with flowers, candles and notes.  The police presence was strong.  I hurried down to the crowd. Unfortunately, when I was there, they did not have a sound system. I could not hear the speakers.  However, at one point, the people in the center starting to chant, "Not in our city!"

It was very hot.  Tri-Met bus drivers arrived with cases of bottled water for the crowd.  People of all color, size, age, shape and form were there.  A group of Muslim women in their hijabs proudly walked by.  People with children, dogs, many pastors with the clerical collars, people with all colors of hair, tattoos, piercing. All gathered together in solidarity.

It was beautiful. My heart ached. So did my back. I had my big piano teacher backpack on.  I knew I needed to leave soon. I wanted to sit somewhere  dark and cry. Alone.

I was planning on going to the gym. Maybe just to sit in the hot tub.

My friend from church arrived. I can't believe she found me amongst all those people! Nice to know I'm not invisible, even at my age.  We chatted and hugged.  We walked over to one of the tables that popped up. There were some beautiful signs being sold.

I told her I needed to leave soon. I was starting to get panicky. Crowds do that to me. I am proud of myself for lasting that long.

I made my way back to the Max. More people had added flowers and noted to the shrine.  The Max pulled up. I got on board and sank down into the nice, cool air conditioned seat. I put my sunglasses on and had a good cry.

I can't say anymore.  I have no more words.

But I will talk to you tomorrow.

God bless you all.  May good prevail... 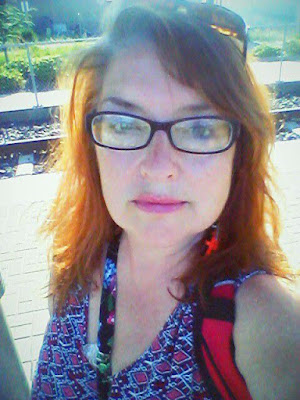 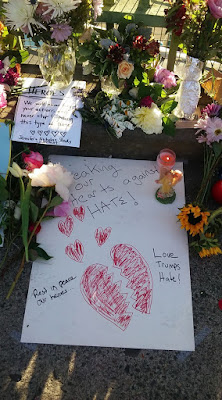 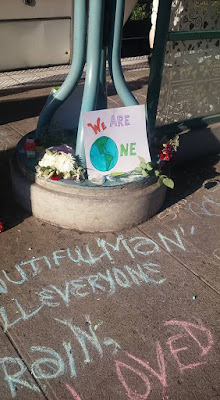 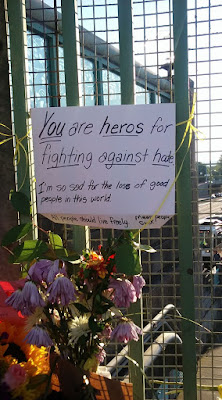 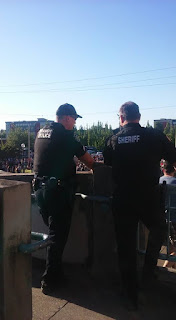 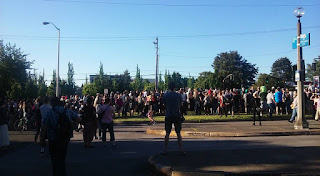 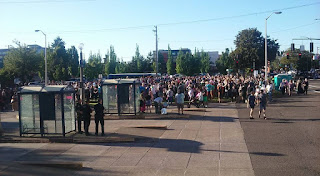 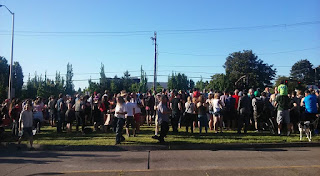 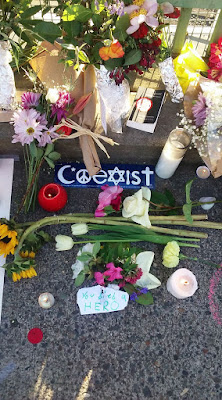 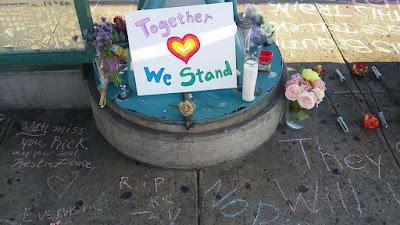 Year Four, Day 208: Happy Socks, Tales from Lyft and the Missing Music in My Life

October 06, 2019
I have completed one sock of my first pair of Happy Socks!  That's my name for them anyway.  They are slipper socks, knitted on a round loom.  Meant to be worn at home, when feeling cozy is of the utmost important. Hey, cozy is always high on my list!

I dubbed them "Happy Socks" because I am making them colorful, and praying for the person who will be wearing them. I feel happy just looking at them!

I also completed the novel, The President Is Missing, by James Patterson and Bill Clinton.

After I read it, I looked at a few reviews online. And I was even more entertained! In fact, I was reading the reviews while riding the bus home the other night. I laughed so hard I snorted. I was getting odd looks from the other passengers! It was this one from "The New Yo…
Post a Comment
Read more