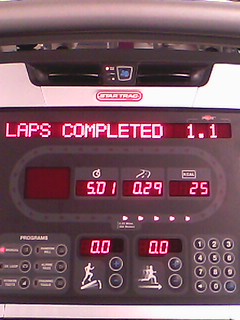 Yesterday I had 17 minutes to catch my bus from the time I entered the gym. If I didn't make that bus, I would have been late for rehearsal.  I am accompanying "The Portland Musical" at one of the grade schools. Yesterday was dress rehearsal.  It would have been very uncool to be late.  So I was in crunch mode. Ironic that the name of my gym is "Crunch".

I almost skipped my workout.  I could have grabbed a cup of tea and gotten there early. But no. I am a determined woman!

So I hopped on the treadmill and sped walked for 5 minutes. I did 0.29 miles.  I actually worked up a sweat! I had a few minutes to spare, so I went over and did some leg lefts on the "Power Tower", one of my least favorite exercises. But I remembered a conversation with my daughter. She said if I want to see progress, I need to do the exercises I hate. Because they are difficult.  I hate the Power Tower.  In fact, I hate all exercises that work my lower abs. But those are my weak muscles.  I justify that most of the exercises hurt my neck.  I'll stop whining now.

The rest of the day went smoothly. I made it rehearsal on time.  Today is the performance.  Those kids are so gosh darn cute.  And the Portland Musical is very entertaining. Educational too. The lady I work with bought the rights to it and has updated it several times. They even have a section about the Tillicum Crossing Bridge that was just built!

I had a student after rehersal. Then I had down time. I had decided to take myself out for dinner again, but to be more sensible after the killer attack chicken tacos from last night. I went to my old hangout, "Tom's Restaurant."  A quaint little diner with a Greek influence.  Very cozy. The servers all know me.  I was a little nervous because most of my favorite items on the menu are laden with carbs.  Like "Greek Spaghetti with Garlic Bread". Pretty much spaghetti with olive oil, garlic and mizithra cheese, and french bread with butter and garlic.  Sigh.  Comfort food with a capital "C".  I behaved.
I don't think my Colon with a capital "C" would have survived that dish. I ordered a Cobb salad (yet another capital "C"!) without bread.

I have learned a little little trick. I mix two different kinds of tea. Unsweetened. No more sweet coffee for awhile.  I had green tea and mint at Tom's.


I also discovered that the 7-11 by my home has many different tea selections. I got orange spice and green tea this morning. A large to-go cup was only like $1.60.  No sweetener or cream. It was satisfying.

After recital season is over, I will go back to packing meals and eating mostly at home. But for now, I have a plan of attack.  Today between the afternoon and evening performances of the Portland Musical, I will visit one of my favorite standby restaurants.  I am thinking soup.